Cardiac arrest outside the hospital is common and has a poor outcome. Studies in laboratory animals suggest that hypothermia induced shortly after the restoration of spontaneous circulation may improve neurologic outcome, but there have been no conclusive studies in humans. In a randomized, controlled trial, we compared the effects of moderate hypothermia and normothermia in patients who remained unconscious after resuscitation from out-of-hospital cardiac arrest.

The study subjects were 77 patients who were randomly assigned to treatment with hypothermia with the core body temperature reduced to 33 degrees C within 2 hours after the return of spontaneous circulation and maintained at that temperature for 12 hours or normothermia. The primary outcome measure was survival to hospital discharge with sufficiently good neurologic function to be discharged to home or to hipogermia rehabilitation facility.

The demographic characteristics of the patients were similar in the hypothermia and normothermia groups. After adjustment for base-line differences in age and time from collapse to the return of spontaneous circulation, the ferapeutyczna ratio for a good outcome with hypothermia as compared with normothermia was 5. Hypothermia was associated with a lower cardiac index, higher systemic vascular resistance, and hyperglycemia.

There was no difference in the frequency of adverse events. Our preliminary observations suggest that treatment with moderate hypothermia appears to improve outcomes in patients with coma after resuscitation from out-of-hospital cardiac arrest.

In this multicenter trial with blinded assessment of the outcome, patients who had been resuscitated after cardiac arrest due to ventricular fibrillation were randomly assigned to undergo therapeutic hypothermia target temperature, 32 degrees C to 34 degrees C, measured in the bladder over a period of 24 hours or to receive standard treatment with normothermia.

Seventy-five of the patients tsrapeutyczna the hypothermia group for whom data were available 55 percent had a favorable neurologic outcome cerebral-performance category, 1 [good recovery] or 2 [moderate disability]as compared with 54 of 39 percent in the normothermia group risk ratio, 1.

Mortality at six months was 41 percent in the hypothermia group 56 of patients diedas compared with 55 percent in the normothermia group 76 of patients; risk ratio, 0. The complication rate did not differ significantly between the terwpeutyczna groups. In patients who hipotsrmia been successfully resuscitated after cardiac arrest due to ventricular fibrillation, therapeutic mild hypothermia increased the rate of a favorable neurologic outcome and reduced mortality.

Good neurologic outcome after cardiac arrest is hard to achieve. Interventions during the resuscitation phase and treatment jipotermia the first hours after the event are critical. Experimental evidence suggests that therapeutic hypothermia is beneficial, and a number of clinical studies on this subject have been published.

We performed a systematic review and meta-analysis to assess the effectiveness of therapeutic hypothermia in patients after cardiac arrest. Neurologic outcome, survival and adverse hipotermiz were our main outcome parameters.

We aimed to perform individual patient data analysis if data were available, and to from subgroups according to the cardiac arrest situation. We searched terapeutycznw following databases: We included all randomized controlled trials assessing the effectiveness of the therapeutic hypothermia in patients after cardiac arrest without language restrictions.

Studies were restricted to adult populations cooled with any cooling method applied within six hours of cardiac arrest.

Validity measures, the intervention, outcome parameters and additional baseline variables were entered into the database. Meta-analysis was only done for a subset of comparable studies with negligible heterogeneity.

For these studies individual patient data were available. Four trials and one abstract reporting on patients were included in the systematic review. Quality of the included studies was good in three out of five included studies. For the three comparable studies on conventional cooling methods all authors provided individual patient data. Across all studies there was no significant difference in reported adverse events between hypothermia and control.

Knapik P, Rychlik W et al. There is a variety of methods for lowering body temperature. However, there are no data showing that any specific method of cooling improves the results or increases survival. A simple method involving surface cooling and ice-cold intravenous fluids, as well as more technologically advanced methods, are used in clinical practice.

One of the more advanced methods is intravascular hypothermia, during which cooling is carried out with the use of a special catheter located in the central vein.

To compare cooling with the use of intravascular hypothermia and cooling using the traditional method. A prospective study was performed in 41 patients with acute coronary syndromes who did not regain consciousness after out-of-hospital or in-hospital cardiac arrest and restoration of spontaneous circulation. Traditional cooling was carried out using uncontrolled surface cooling, ice-cold intravenous fluids and ice-cold gastric lavage.

Temperature profiles were significantly different in both groups in the readings taken from both sites. The presented technique of intravascular hypothermia provides more precise temperature control in comparison with the traditional method.

Evidence suggests that therapeutic hypothermia improves neurological outcome in these patients. In this analysis, we investigate whether therapeutic hypothermia influences the length of intensive care unit ICU stay and ventilator time in patients surviving out-of-hospital cardiac arrest. A prospective observational study with historical controls was conducted at our medical ICU. Fifty-two consecutive patients median age All patients received the same standard of care.

After resuscitation of the cardiac arrest patient, reperfusion to the brain begins a cascade of events that may lead to permanent brain damage. 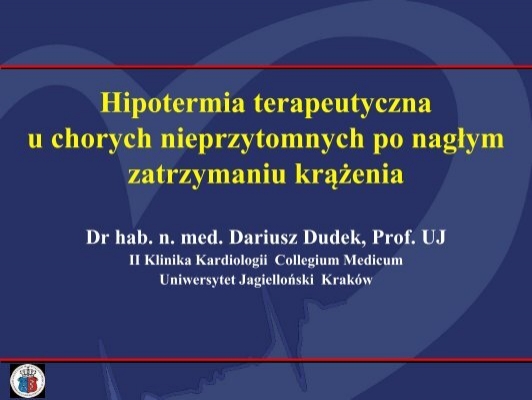 Cooling suppresses the inflammatory response related to ischemia and metabolic demand, improving oxygen supply to anoxic areas. Until recently, cooling was only performed in the hospital setting. Recent studies have questioned whether initiating the cooling process immediately after resuscitation is beneficial in the pre-hospital setting. The primary purpose of this study was to examine the feasibility and safety of pre-hospital hypothermia via data extraction from randomized controlled terrapeutyczna and statistical meta-analysis.

Studies included in this analysis did show a significant statistical difference with the ability to lower the body temperature when beginning pre-hospital cooling immediately, making it feasible to start therapeutic hypothermia in the pre-hospital setting. Further research is needed to determine neurological and discharge outcomes as the studies were not powered to determine statistical significance.

To test the feasibility and the speed of a helmet device hipotemria achieve the target temperature of 34 degrees C in unconscious after out of hospital cardiac arrest CA. Patients with cardiac arrest due to asystole or pulseless electrical activity PEA who remained unconscious after restoration of spontaneous circulation ROSC were enrolled in the study and randomised into two groups: Bladder and tympanic temperature were monitored every 15 min.

A helmet device was used to induce mild hypothermia in the HG. Later on, the effect of mild hypothermia on the haemodynamics, electrolytes, lactate, arterial tearpeutyczna, CaO2, CvO2 and O2 extraction ratio were analysed and compared to the values obtained from the NG. Thirty terapeutycznx were eligible for the study, 16 were randomised into the HG and 14 were randomised into the NG.

The median tympanic temperature at admission in both groups was In the HG, the core and the central target temperature of 34 degrees C were achieved after a median time of and 60 min, respectively after ROSC.

At the start of the study, no significant differences between the NG and HG were seen. At the end of the study, lactate concentration and O2 extraction ratio were significantly hipoterma in the HG; however the CvO2 was significantly terapeutydzna in the NG. Mild hypothermia induced by a helmet device was feasible, easy to perform, inexpensive and effective, with no increase in complications. Only a few patients survive cardiac arrest with favorable neurologic recovery. Our objective was to assess whether induced hypothermia improves neurologic recovery in survivors of primary cardiac arrest.

We included randomized and quasi-randomized, controlled trials of adults who were successfully resuscitated, where therapeutic hypothermia was applied within 6 hrs after arrival at the emergency department and where the neurologic outcome was compared. We excluded studies without a control group and studies with historical controls. All authors of the identified trials supplied individual patient data with a predefined set of variables. We identified three randomized trials. The analyses were conducted according to the intention-to-treat principle.

Its long-term effectiveness and feasibility at an organizational level need further research. A systematic review and meta-analysis of randomized and non-randomized studies. The benefit of therapeutic hypothermia TH for comatose adult patients with return of spontaneous circulation after cardiac arrest CA with non-shockable initial rhythms is uncertain.